A book excerpt from Matterness: What Fearless Leaders Know About the Power and Promise of Social Media by Allison Fine: 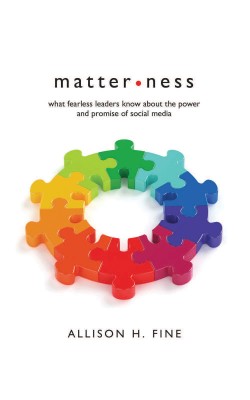 Karen Klein was riding a school bus filled with middle-school children in Greece, NY, on June 19, 2012. Karen had been safely delivering children to and from school for twenty-three years, but as much as that Tuesday was like any other day on the bus, it was also profoundly different. The yelling and taunting that routinely occurs on school buses across the country spiraled out of control that day, and rather than aiming their cruel verbal fusillades at one another, three seventh-grade boys aimed it at Karen — and a fourth videotaped it on his cell phone.

The video was posted on Facebook and on YouTube and instantly went viral. Two days later, Karen was on the Today Show discussing the incident and how violated she felt. By the time the interview ended, millions of people had viewed the video online.

The same day that Karen was talking to Matt Lauer, Max Sidorov, a nutritionist in Toronto, heard the story on his local TV news. He immediately set up a fundraising site on Indiegogo.com to support Karen. “Let’s raise $5,000 and send Karen on vacation,” he posted. After two hours, the Indiegogo campaign exceeded Max’s $5,000 goal. But donors kept giving money. By the end of the first day, $100,000 had been raised. After a month, Max had raised more than $700,000 from more than 32,000 people around the world. Karen is now a retired bus monitor.

Max turned Karen’s cascade into an action cascade wherein the natural generosity of people becomes contagious and visible. Social media enable large numbers of people easily see and match the generosity of other people. Max’s effort had a few key ingredients: a sticky story (one that is rooted in emotion and easy to explain), had a sympathetic victim, vicious villains, and video that proved what happened. But it also had Max, who was in constant conversation with his crowd, working with people not at them, asking them to join him, explaining how the money would be used, responding to their questions and interests.

Max’s effort was infused with what I call Matterness, the intersection of people and causes that generates enormous amounts of social capital and generosity. Leadership infused with Matterness is open to the input of constituents, encourages leaders to be human beings with real flaws and vulnerabilities, values relationships over transactions, and is a capable facilitator of crowds of people with their own good ideas and resources.

Social media have not made us kinder and more generous —we express kindness and generosity in the same ways we have for decades — but they do provide many more avenues that organizations and their leaders can capitalize on to express and share our natural kindnesses and generosity.

Allison Fine is among the pre-eminent guides to the social media revolution. Her new book is Matterness: What Fearless Leaders Know About the Power and Promise of Social Media. Matterness explains how and why people and organizations are better together with social media. It implores organizational leaders to stop focusing in the mythical fears keeping them locked behind their walls and to start working with rather than at people. In the end, the book explains that we don’t need better people; we need better leaders.