The Power of Mentorship for Young Creative Writers

A Surprising Family of Writers and Mentors, and Friends Gives Girls a Chance to Write and Go To College 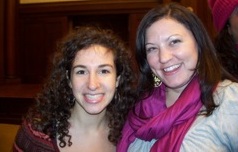 Engel and Baden pose for a photo after Engel was awarded a 2010 New York Women in Communications Foundation  Scholarship.

Inside CafÃ© Grumpy in Chelsea New York, with the clang and bang of coffee grinding in the background, the 18 year old Shira Engel sat in a corner table, holding a leather-bound journal, open to a page of her own poetry. Across from her was a young woman, Morgan Baden, with a brightly knit scarf draped around her neck. Brows knit, Engel read aloud, paused, and looked up. A steaming cup of coffee in her hands, Baden brought the ceramic mug to her lips, mulling over Engel’s work. Putting down the mug, she looked over the stanza, pointed to the page. Engel scribbled down notes on the side. Baden looked up and grinned, and suddenly, Engel threw her head back in laughter, holding the journal to her chest.

For years, Engel has been drawn to writing poetry and has grown to be an aspiring writer. Baden, is her mentor, a writer and social media manager at Scholastic. They had been meeting weekly for three years. They didn’t meet accidentally. And like many girls in New York, Engel, a girl who always wanted to write, didn’t have any writing classes at school because of budget cuts that left her school without another option.

“They cut out Spanish classes [the only language class] by my junior year of high school, so they definitely did not have creative writing as an option,  recalls Engel. “I really craved that and I had trouble identifying myself as a writer in  9th grade because I had no space to write. 

At home, her parents were going through a divorce. And while they never tried to stop Shira from pursuing her dreams, they also wanted her to pursue a career that could provide a steady source of income. With a whirlwind of events, Engel had little room to process and express the overwhelming emotions that she felt.

“They were very supportive of my writing, but they do have the mentality that you need to do something that makes money,  she says.

Engel learned about a program called Girls Write Now, a New York City based nonprofit that pairs girls with mentors who are successful female writers in the professional world. Since it’s creation in 1998, the organization led by founder Maya Nussbaum has served over 6,000 girls in the New York City area, 3,500 of which have been considered underserved or at risk. Throughout  the programs duration, girls partake in weekly meetings with mentors, workshops, and public readings, which are often both one of the most terrifying and rewarding experiences of the program for many girls.

Engel was soon paired up with Baden.   Baden worked full time at Scholastic on top of writing in her spare time.   And she seemed to be on top of it all “ with her journal and iPhone with her.

“She is such a talented writer but she is also a nurturer as a writer and that is something I wouldn’t find anywhere else,  says Engel. “Morgan [Baden]and I started working together and she encouraged my writing but she also pushed it, I grew more committed,  she explains. Stanza by stanza, the pair would work through Engel’s poetry, with Baden providing feedback.

Throughout her three years with Girls Write Now, Engel and Baden were also part of the community of other female writers and mentors.   The staff, volunteer mentors and other girls at Girls Write Now became a nurturing family that allowed Engel to channel the confusion and hurt of a parents divorce into works of poetry.
“At Girls Write Now, we bonded over writing and that was already so intimate so to go from there, we are able to share so much more of our lives and so many different parts of who we are through what we have in common,  explains Engel.Girls Write Now also provided her with the guidance to navigate the college application process. They opened doors to universities that she didn’t even think were possible.

“My parents really wanted me to go to a state school. No one in my family had ever gone to a private school,  Engel explains. “But on a college tour, I fell in love with Wesleyan and their writing program. 

With the help of her mentor and Girls Write Now, Engel won numerous awards and scholarships.

“Morgan and Girls Write Now in general encouraged me [to pursue going to Wesleyan] and showed me scholarships [that] I wouldn’t have found out about without Girls Write Now,  she explains.

Now at the end of her freshmen year at Wesleyan, Engel is pursuing a double major in English and Feministic, Gender, and Sexuality Studies.     Going to classes, studying to be a yoga teacher, and reading novels about Tudor England, Engel, feels that she has the ability to choose her future.

“With Girls Write Now, you’re getting us before we go to college or even think about going or not going to college,  she explains. ” ¦to be able to have that positive influence on people, to show the impossible is possible, while serving in the greater community of writing, is really amazing. 

One of the greatest gifts that Girls Write Now has given Engel was that what began as a professional mentorship developed into lasting relationship.

“Morgan was in no way contracted to stay on as my mentor or anything yet whenever I came home from Wesleyan ¦we would talk about our lives in every sense. We talk about boys. We talk about careers. We have become friends. She doesn’t treat me like I am over ten years younger than her. We connect past boundaries of age, which is what a mentor/mentee relationship is all about,  says Engel.