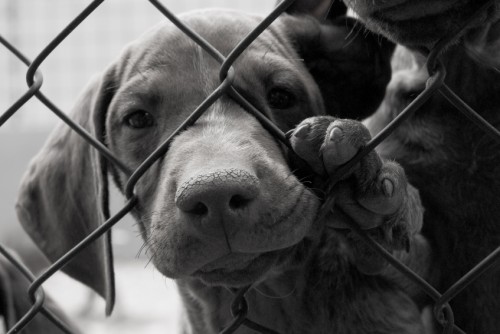 San Francisco is bringing new meaning to the phrase “begging for a puppy.” In fact, the city is hoping that its panhandling population will trade one for the other. The city has long battled its panhandling problem with everything from outlawing sitting on the sidewalk to local employment programs with not much luck. Now that already overpopulated  local animal shelters are seeing a huge influx in surrendered dogs due to the economic downturn, a new program pairing problem pups with certain panhandlers might be part of the solution.

The brand new program, called Wonderful Opportunities for Occupants and Fidos ( yes, that’s right, “WOOF”), will pay panhandlers up to $75 a week to foster puppies that are deemed less adoptable, according to the San Francisco Chronicle. These puppies might be extra shy, or extra rambunctious, but mostly, they just need a little more socialization–perhaps a person to spend the whole day with them. Frequently, these dogs are euthanized. People selected for the program must swear off begging for money–if they are caught doing such, they must relinquish their foster dog. The program also provides the dogs with food, vet care and as many toys as they need.   Participants must not live on the streets and can not have a history of violence or hoarding. Each will get several training sessions with Animal Control and check-ins from the trainer.

But what about applicants who live in shelters? Dogs are not allowed in many group homes but some dogs may be considered service or companion animals, this may have to be decided on a case by case basis. And what happens at the end of the foster period? Participants have the option to adopt their dog permanently or foster another. But how will a panhandler permanently support a dog without going back to panhandling?

The program was initially funded by Vanessa Getty but the city will need to search for continued funding.

What do you think of the idea? Is this a win-win for homeless puppies, panhandlers and the City of San Francisco? Let us know.