Q & A with David Lansdowne 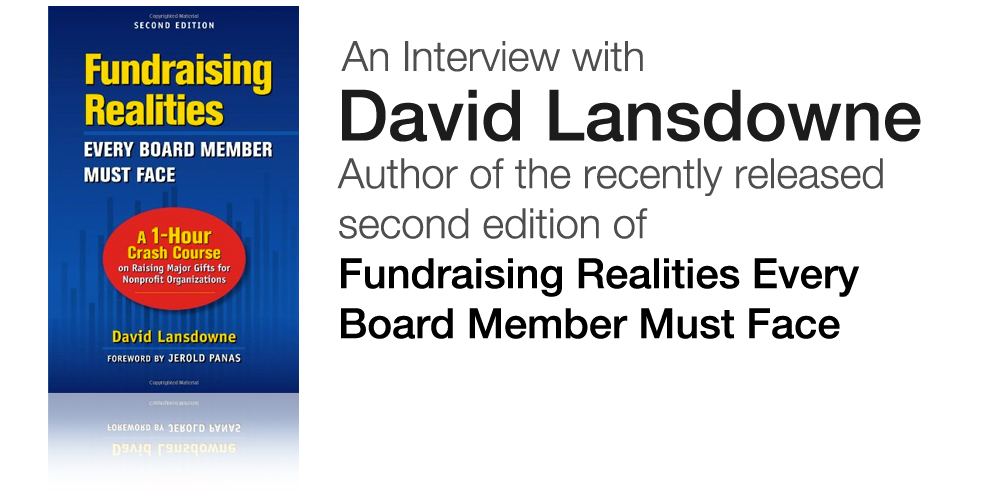 Many of us are apologetic when asking – as if we’re asking the donor to give as a personal favor to us. That’s not what we’re doing.  We’re seeking help for a worthy cause. Why can’t we seem to approach it that way?

Kay Grace calls it the “tin can” approach, and, yes, it still dogs us. In Fundraising Realities I tell the story of Wes Autry. Autry was standing with his two young daughters at a New York subway stop when a student goes into convulsions and falls from the platform, right onto the tracks. And, mind you, there’s a train barreling in! What does Autry do? He jumps down, throws himself on the student. They’re both nestled between the rails now. Soon the 100-ton train thunders over them. I’m not saying every solicitor is as selfless as Autry, but asking on behalf of a good cause – whether it’s a hospital or a college or a Y – is a selfless act, too. If more people understood it that way, they wouldn’t feel the need to apologize. By the way, Autry and the student walked away from the incident, saved by a clearance of two inches.

Those in the field know that asking a would-be donor for a specific amount is key. But some board members still balk  – they’d rather ask for “whatever you can give.” Any help you can offer?

Say a co-worker walks into this office and asks you to pitch in for a colleague’s wedding gift. If you’re like me, the first question you ask is “How much you have in mind?” or “What’s everybody giving?” I’m looking for a frame of reference. Should I give $5 or $50? It’s the same with donors. They want to know, are you talking $500, $5,000, or $50,000? Or take another example. When you bring your car in for service, the mechanic diagnoses the problem and gives you a quote. What if instead he said nothing? You wouldn’t know whether you could afford the repair or even if your car is worth fixing. It would make you uncomfortable. Don’t treat your prospect like that. Suggest the amount you have in mind, a “quote” if you will. He won’t slam the hood on your fingers.

Let me ask you to comment on what seem to be universal board perceptions. First, publicity raises money. Does it?

I think it was an Irish poet who said “All publicity is good, except an obituary notice.” So, certainly, publicity can be helpful. Just don’t expect all your well-placed stories to raise money unless yours is an extreme case like the Boston Marathon bombing. To raise significant sums, you have to visit your prospects in person – sit right across from them and ask. Hear your heart thump. Those who think publicity raises money tend to be novices or mildly committed volunteers. They hope the media will do the heavy lifting. When it doesn’t, they blame the failure not on themselves but on the lack of exposure.

That’s too general a statement. But let me answer it this way. It’s easy for board members to get excited about a dinner dance or gala. It seems like fun, especially if you ignore all the attendant costs – banquet hall, catering, printing, flowers, decorations, music. But those who’ve done special events know how those costs rise quicker than champagne bubbles. A gala to benefit the local museum might raise $10,000 and consume literally 300 volunteer hours. Often you could devote a fraction of that time to identifying, cultivating, and soliciting a handful of high-potential donors and raise the same amount, if not more. Sure, there are valid reasons for holding an event, calling attention to your cause, for example. But as a method for raising money, special events – in general – aren’t terribly efficient.

Ah, yes, I call it the “one size fits all” strategy. Anyone with experience knows that doesn’t work. To begin with, not every one of those 100 people will give. You often need to ask three of four people to secure one gift. And of those who do give, not everyone’s going to contribute $1,000. And, finally, asking for $1,000 limits those who could or would give $5,000 or even more. That’s why we seek gifts proportionate to the donor’s means.

Major institutions such as hospitals and colleges – they would seem easier to raise money for. But what about, well, let’s call them ancillary causes?

Of course you’re right. Cancer touches so many of us, with such devastation, that it’s easier to identify with than, say, restoring a local historical house. But even with that narrow cause you can make a case. For example, the historical house will be important to surrounding shop owners – they’ll benefit from the increased traffic. Nearby homeowners will have a stake because their property values will rise. Even Jane Doe, who lives on the other side of town, will benefit. Now the town will have a great place for weddings or gatherings or concerts. It’s not as easy, but nine times out of ten you can make a valid case for almost any serious organization.

You alluded earlier to the solicitor’s thumping heart when asking for a gift. Is the only answer Xanax?

Hmm, could be. But seriously, donors give for a variety of reasons. The Colorado Nonprofit Association did a study a few years back and found the top three reasons are: donors believe the organization is trustworthy, that’s it’s well-managed, and the cause is something they support. But even so, what sparks a gift in the first place is the fact that there you are, in the flesh, asking for it. The problem is that many of us will do anything and everything but ask. Maybe we don’t fully believe in the cause. Or we’re afraid we’ll be turned down. Or we question how persuasive we are. Or we need to grout the shower tiles that night. There will always be a knot in your stomach. At least for 99 percent of us. The best antidote is pretty simple: be prepared, be enthusiastic about your cause, communicate the urgency of the need, and make your own gift first. It’s wonderfully effective when you can say to your prospect: “John, I’ve contributed $5,000 to this project myself. I believe it’s that important. I’m asking you to join me.”