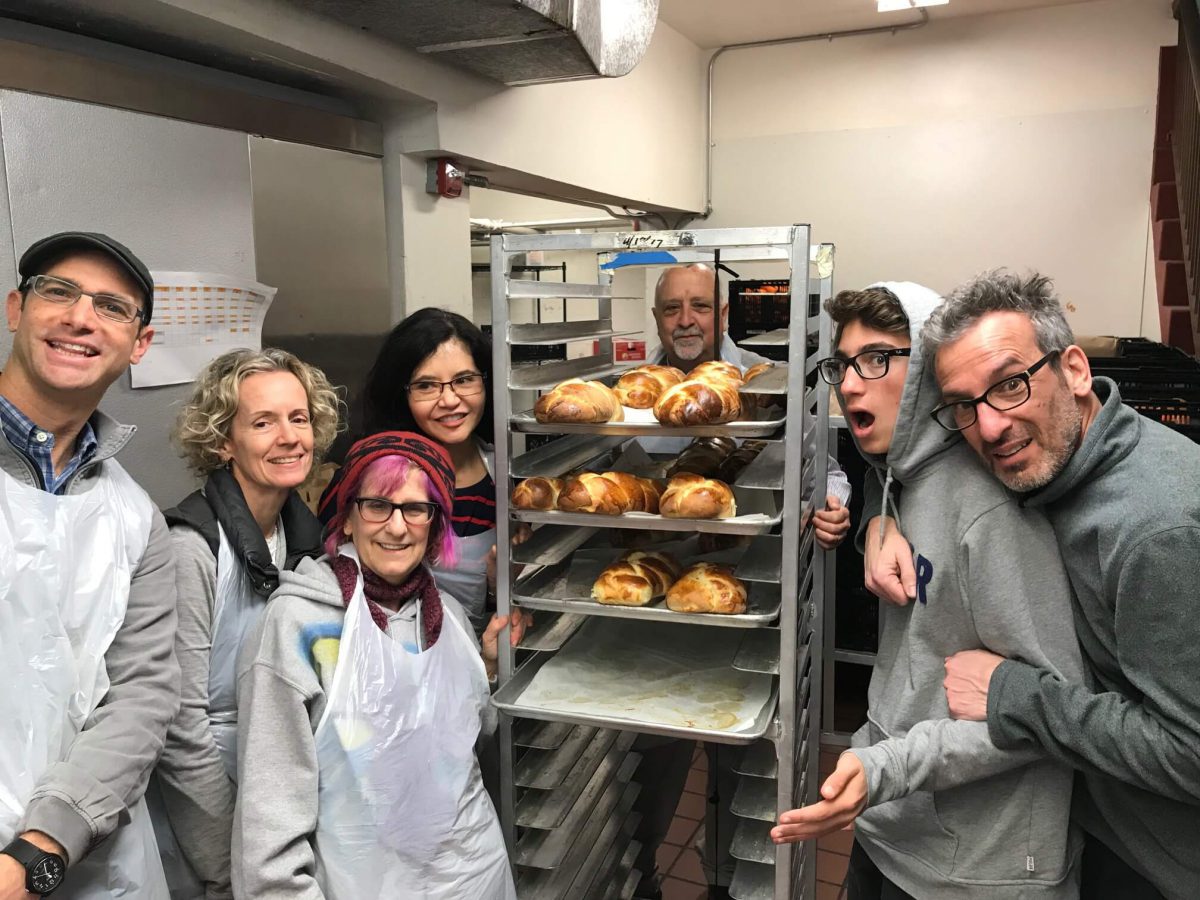 I arrived at 9 AM and donned a disposable apron, hairnet, and latex gloves. I found myself in a metallic room hidden in the basement, furnished with large steel counters and bins with mysterious produce inside. Bright, yellow lights lit laughter underneath. The volunteers there taught me how to measure dough, how to roll it into cigars, and how to braid those cigars into the familiar pattern that makes mortals salivate. As we prepared the challah, my fellow volunteers taught me about the history of GLIDE and the challah program.

Glide Memorial Church was founded in the early 20th-century on the corner of Ellis and Taylor Street. Under the guidance of Reverend Cecil Williams, who joined the church at the start of the hippie movement, GLIDE became a refuge for San Francisco’s oppressed. Now a household name, GLIDE provides essential services and a spiritual community to homeless and economically fragile residents of the Tenderloin. Its mission is simple—To treat everyone who comes through its doors with unconditional love.

The challah program began last year as a collaborative between GLIDE and a local synagogue, The Kitchen. Every week, volunteers from both organizations gather to bake challah for the GLIDE staff. “We have to feed the people who feed people,” Michael Lezak, the Rabbi at GLIDE, tells me. It’s a small gesture, but it means a lot to to the justice warriors upstairs who face new traumas with each workday. From the way their faces lit up on receiving this bready gift, it’s clear that appreciation for the work they do is in scarce supply. 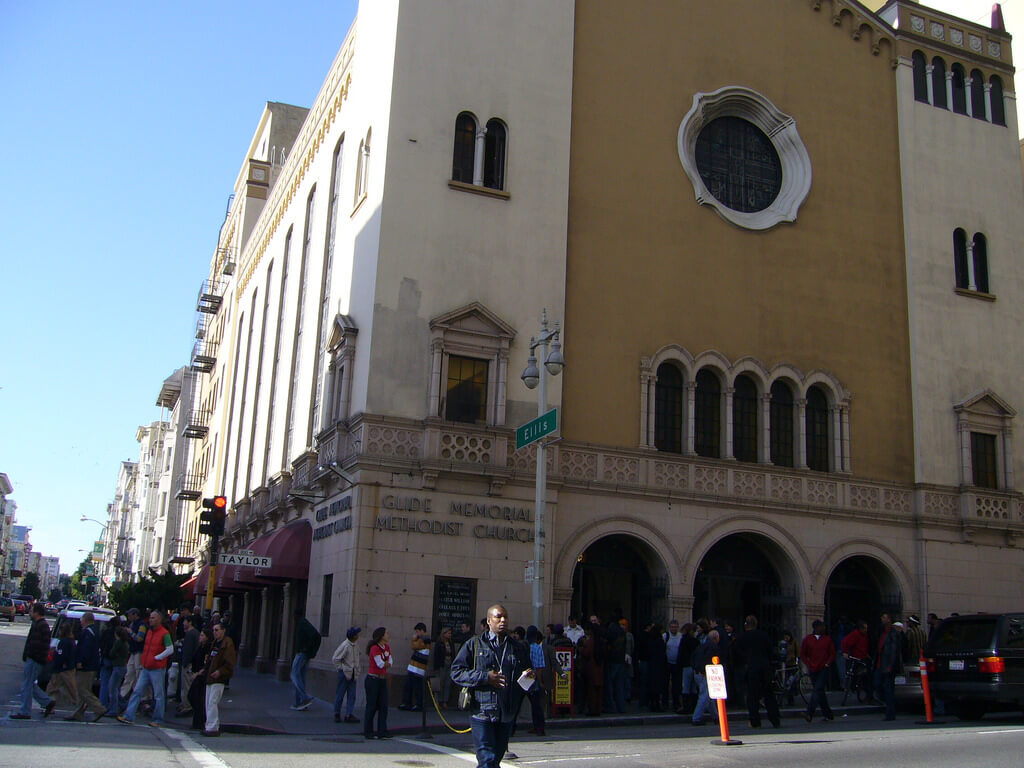 While braiding the limp, dough cigars I had haphazardly rolled, I asked my fellow volunteers what motivated them to get up every Friday morning, take time off of work, and bake challah in a crowded prep room.

Multiple responded that this helped them combat a growing feeling of powerlessness. It’s not news that Americans, on both sides of the aisle, feel that their individual voice has been overshadowed by larger, more powerful interests. Whether or not it has a measurable impact on fixing social issues, volunteerism restores agency to those who care about the condition of our society yet remain disillusioned with our democracy.

I spoke to a father who had been a resident of San Francisco the past fourteen years, a congregant of The Kitchen for the past eight, and had recently started volunteering with the challah program. Having lived in the city through the recession and the subsequent tech boom, he feels a responsibility for those whose livelihoods were disrupted by these changes. Despite unemployment hitting record lows, San Francisco sees an uptick in homeless and displaced individuals. This is, in large part, due to a lack of affordable housing and a surge in the cost of living. Like this father, each San Francisco resident has to ask themself, “What responsibility do I have to those in the city who suffer at the expense of my comfort?”

As the challah sat in the oven, I found myself speaking with one of the program’s founding members, Marilyn Heiss. Heiss has previously said that Friday mornings at GLIDE are “the holiest thing I do all week,” and she reiterated that sentiment to me. As a Jewish educator and leader, her commitment to equity means a great deal, showing students and fellow practitioners that faith extends beyond the pew. 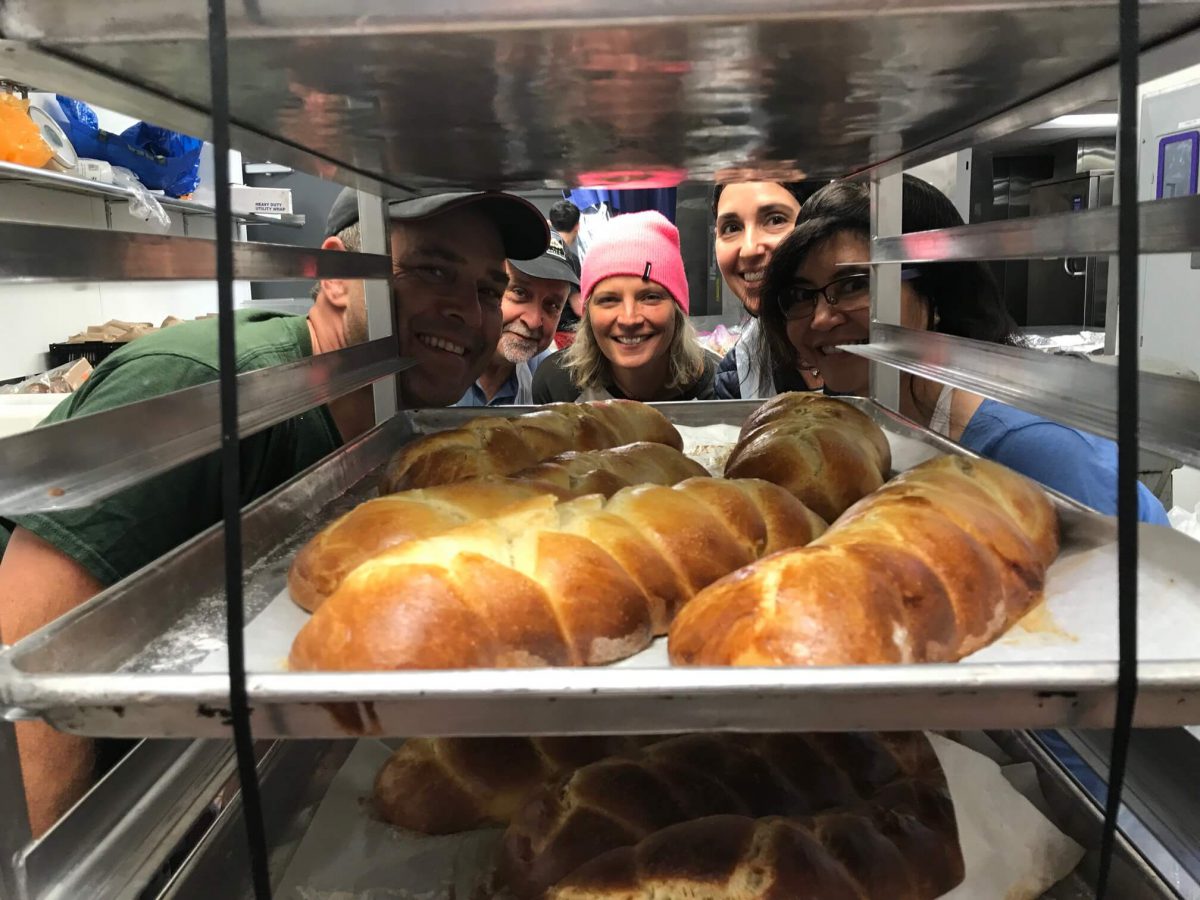 Challah, ready to be delivered to the hard-working GLIDE staff. Source: Michael Lezak

When the challah was finished and ready to deliver, we said a blessing. After the blessing was over, Michael instructed each of us to rip off a piece of challah and slather it with “more butter than we thought we deserved.” As I dowsed my piece in fat, I thought of volunteers across the world who spend their Fridays, their weekends, their evenings, and their lives trying to leave their community better than they found it. These people deserve a lifetime supply of buttered challah.

Support GLIDE in its mission to feed and house San Francisco’s in-need residents.

Write a review of a nonprofit you’re passionate about to show our community the inspiring work that happens every day.

Ian Anstee is a Stanford Public Interest Fellow with GreatNonprofits. He serves as the Steering Committee chair for Camp Kesem at Stanford and cares deeply about economic equity.