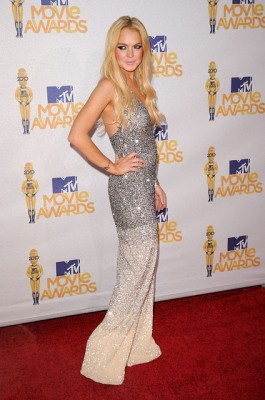 With Lilo’s latest legal trouble; a car accident on Malibu’s Pacific Coast Highway in a rented Porsche, and reports of partying in Hollywood into the wee hours just after checking in to the hospital, we’re thinking of ways the fallen star could slow down and give back. (Or at least get some of her court-ordered community service hours out of the way!)

1. Helping out My New Red Shoes

This nonprofit helps give homeless children confidence by providing them with new clothes and shoes for the first day of school. Having previously come out with her own clothing line, this is right up Lohan’s alley. And although she recently had a wardrobe malfunction on the set of her latest project, “Liz and Dick,” she should be able to handle picking out clothes for children despite not being able to keep them on herself. And if she is found to have violated the terms of her probation from a 2007 DUI conviction, she won’t be needing her own closet full of clothes anyway—what with her wardrobe consisting of purely orange jumpsuits.

2. Getting  Behind the Wheel for Neighbor Ride

Lindsay could use some slow and steady driving practice. Neighbor Ride, an organization helping seniors with transportation, could be just what Lilo needs. Lohan would be limited to a 900 square mile-area in Maryland, without having to wear an ankle bracelet.

3. Donning some Gloves for a Beach Cleanup

As we mentioned before, Lohan recently crashed her rented car (into an 18-wheeler) in broad daylight in Malibu. Now according to her eHarmony profile featured on Funny or Die, in addition to car chases on the Pacific Coast Highway, Lohan loves long walks on the beach. And alcohol. What better way to give back than pick up pieces of her front bumper while drunkenly stumbling down the shore. Sure she just totaled an $80,000 Porsche…cheers!

Unless her hair is too damaged from her switch from red to blonde to black back to red, Lohan has plenty she could donate to a charity that helps cancer patients get wigs . Just like formerly-troubled pop star Britney Spears did back in 2007 when she hit a rough patch, Lohan could possibly find the whole cutting-off-all-your-hair thing therapeutic. This could really do wonders for reinventing herself, as well as the child receiving her hair, since Lohan’s hair could really bring joy to the life of any young “Parent Trap” or “Mean Girls” fan. I mean, a lot of people wish they had someone else’s hair, but who actually gets to wear their favorite movie star’s hair?

5. Putting on a Tool Belt for Habitat for Humanity

Lastly, in case Lilo can’t get her acting career back on track, volunteer work building houses with Habitat for Humanity can prep her for a new career in construction. She’s already an expert in getting hammered. However, Habitat builds homes all over the world and, given Lohan’s history of drug abuse, it may be best that she not build in countries with a major drug trade.

What would you have Lindsay do? Do you think it’s important for stars to give back?