Hey Larry Ellison, what are you gonna do with all that money? 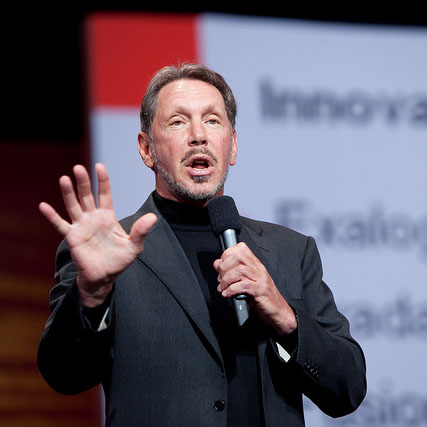 Larry Ellison speaks, but presumably not about philanthropy.

Larry Ellison could use some lessons in philanthropy. The co-founder and CEO of Oracle and third-richest American (and sixth richest person in the world) according to Forbes, has recently made headlines for his purchase of 98% of the Hawaiian island of Lanai. It reportedly cost him between $500 and $600 million. So why exactly would Ellison purchase this sleepy island, with no traffic lights and a strong commitment to native Hawaiian culture and traditions? Rumor has it Ellison bought Lanai to trump his arch rivals, Sir Richard Branson and Marc Benioff. Ellison however, is dead last behind those rivals in terms of philanthropy. Only $300,000 from his foundation went to charities in 2010.  That’s only .00083 percent of Ellison’s estimated $36 billion
net worth.

Benioff, CEO of Salesforce.com which competes with Oracle, built his own enormous compound on the Big Island of Hawaii.  Sir Richard Branson, owner of the Virgin Group, goes head to head with Ellison in the America’s Cup.  Lanai is over 1,000 times larger than the one Branson owns in the Caribbean.  By buying Lanai, Ellison gets to one up Benioff and Branson in terms of island ownership.

But Ellison’s purchase of Lanai is just one in a long list of extravagant expenditures. He has spent over $100 million on his yacht racing team (BMW Oracle), and $970,000 for his McLaren F1 luxury car and reports have him doling out $100,000 cars to his friends. Ellison sold his yacht, Rising Sun, in 2010. It cost him over $200 million to build. One of his many properties is a 23-acre Woodside, California estate, valued at $70.4 million. After filing a claim that the Woodside home suffers from “significant functional obsolescence,” Ellison received a tax break of $3 million. The break cost the local school district $330,000 in tax revenue. So, despite his wealth, Ellison seems to guard his money like a Chihuahua guarding a squeaky toy.

Funding the Fountain of Youth?

In 2011, Ellison gave away $59.2 million – but all to his own foundation, the Ellison Medical Foundation (wanna be the first to write a review?). The Foundation’s goal is to support research on aging. (We’re glad Larry’s trying to secure his own immortality.) However, at the rate that the Ellison Foundation actually gives, it might take a while… In 2010 the Foundation’s executive director was paid a salary of  $248,000 and the Foundation only spent about $300,000 on charitable giving in that same year. And two-thirds of that spending went toward a single symposium on aging. The Foundation received $9 million in grants and gifts that year.

In contrast to Ellison’s miniscule giving, his competitors, Benioff and Branson, have earned accolades for their generosity. Benioff pioneered the 1/1/1 Integrated Philanthropic Model. Under this model, companies donate 1 percent of profits, 1 percent of equity, and 1 percent of employee hours. Benioff’s Salesforce has followed this model. Among other donations, Benioff and his wife have pledged a $100 million gift to University of California San Francisco to build a new children’s hospital in the Mission Bay area of the city. Benioff has already transferred half of the funds; the other half will be given over the next five years. It’s no wonder that Barron’s has named Benioff and his wife as one of its Top 25 Most Effective Philanthropists. Sir Richard Branson is no slouch either, having set up the Branson School of Entrepreneurship in South Africa in order to provide start-ups and micro-enterprises with skills, services, networks and financial help. He also instituted the Virgin Earth Challenge, which each year awards $25 million to the individual or group that comes up with a sustainable plan to remove greenhouse gases from the atmosphere.

Benioff and Branson don’t donate to charities for the purpose of helping themselves. If Larry wants to get like Marc and Rich, he should ramp up his philanthropy, big time.

So we’re asking you, where do you think Larry Ellison should donate his money? What could your favorite nonprofit accomplish with .00083 percent of his estimated net worth?  Stay tuned to see GreatNonprofits users’ suggestions about where the Ellison fortune could go!