From Leftovers to a Feast

In a story that aired earlier this year, NPR reported that the amount of food wasted each year in the U.S. is the equivalent of 141 trillion calories or about 1,249 calories per person each day. It’s a startling figure and certainly a novel way of looking at food waste.

We all are aware of food waste and perhaps try to mitigate it on a personal level by composting rather than tossing spoiled food items in the trash. Here are some innovative nonprofits that go so much further. Some use ancient methods, reaching back to biblical times; others use the latest technology. The solutions are out there!

Society of St. Andrew, located in Big Island, Va., is dedicated to salvaging produce left to rot in farmers’ fields and orchards and delivering this food to those in need. This practice, called “gleaning,” has fed those in need around the globe for hundreds of years. Society of St. Andrew (top-rated by GreatNonprofits in 2013) recovered more than 8.4 million pounds of produce from January through July 2014. 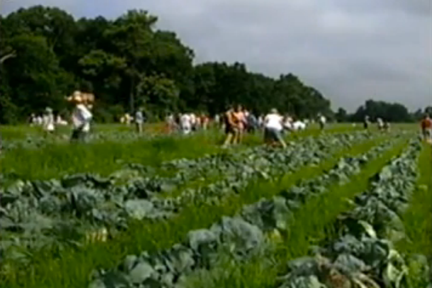 Since 1995, Angel Harvest has picked up good, “un-served,” perishable food from 3,900 events, caterers, and corporate cafeterias and delivered it to emergency feeding programs throughout Los Angeles County.

Every day, Angel Harvest’s trucks pick up everything . . . “from leftover Chateaubriand and prosciutto canapés” to leftover green beans at a UCLA cafeteria.
This unique social program is based on the simple principle of “neighbors feeding neighbors.”

In California, Second Harvest Food Bank of Santa Clara and Santa Mateo Counties has a simple mission: “Providing food for people in need in our community.” This nonprofit, top-rated by GreatNonprofits in 2014, serves low-income people; many are families with dependent children or seniors. Here are two great donor programs: 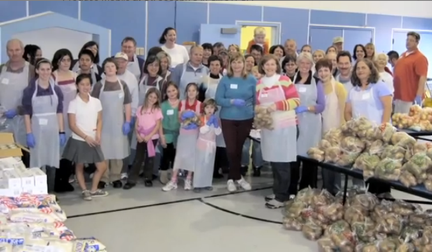 Village Harvest Corporation, a nonprofit volunteer organization serving the greater San Francisco Bay Area, harvests fruit from backyards and small orchards. It then passes the food along to agencies that feed the hungry. This nonprofit also provides education on fruit tree care, harvesting, and food preservation.

In keeping with the times, we now have apps and websites that help connect food to people who need it most.

Feeding Forward is a smartphone app that connects available food with hungry people. It is the brainchild of Komal Ahmad, who came up with the idea as a student at UC Berkeley. She saw the potential of feeding the hungry with leftovers from Cal Dining.

Using Ahmad’s app, donors enter a description of the food, photograph it with a smartphone, and specify a pickup time and size of vehicle needed to transport the food. The app sends the details to a “virtual marketplace.” The food type (like “sandwiches”) is matched with an organization that can use that type of food at that particular time. The app identifies a volunteer who can transport the food.

This process takes just a few minutes. After the food is dropped off, a volunteer takes a photo of the food at its final destination. Donors see the impact their leftovers have on a community that needed it.

Food Cowboy, another startup, was founded by Roger Gordon, lawyer and former caterer; his brother Richard, a long-haul trucker who specializes in hauling produce; and Barbara Cohen, author of the USDA’s Community Food Security Assessment Toolkit.

As a trucker, Richard witnessed firsthand the complicated issues involved in rescuing produce. Many times, retailers would reject a shipment for cosmetic reasons. These blemishes had no impact on the nutritional value of the product. No mechanism was in place to channel the food to local nonprofits. The brothers have built a website that truckers, food companies, and nonprofits can use to locate each other.

CropMobster uses a message board, similar to craigslist, with postings that connect people with excess food to those who need it. The posts are categorized and listed by alert type, such as:

Recent items listed on the website cover a wide range of offerings, from a freebie “old hen ready to move on” to 200 pounds of heirloom tomatoes. CropMobster co-founder Nick Papadopoulos came up with the idea when he was working his family farm in Petaluma, Calif. He saw firsthand the lack of processes for getting viable food left in the fields to those who need it.

In California, as of late August 2014, CropMobster has saved more than 1,000,000 pounds of premium local food from going to waste in Sonoma and Marin counties.

Harvest Season Is in Full Swing . . . Let’s Get Out There!

So many ways to give, from working in the fields to posting items on a website.

And you have no need to worry about your responsibility as a participant in this charitable work. For details, read about the Good Samaritan Food Donation Act.