Fourth Graders Near Goal to Build a School in Kenya 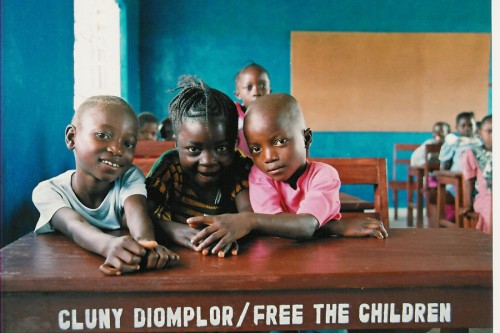 Students at a private academy bordering Silicon Valley, Calif., bustle about a sprawling campus evocative of a country club. But amid this campus dotted with tennis courts and a pool, a cadre of fourth-graders has quietly mobilized to personally raise $7,000 toward building a school for their far-less privileged peers in Kenya, under the auspices of the Free The Children international charity and educational partner.

It all began with a segment featuring Free The Children on CBS News’ television program 60 Minutes. A fourth grader and his mother watched with keen interest as Craig Kielburger, the charity’s thirty-year-old founder, spoke about the group’s sustainable development projects in places such as Sierra Leone. The two felt an instant calling.

“I wanted to get involved in Free The Children because I was sad that there were so many children who could not get a good education, food, and water easily,” explained the fourth grader.

Inspired, mother and son conversed with others in their community, eventually inviting a Free The Children speaker to make a presentation at their home.  Ultimately, a total of eight 4th-graders joined up to create a new Free The Children chapter, and a teacher helped facilitate their meetings – joining the ranks of more than 6,000 schools across North America that currently participate in the charity’s programs.

Once the fourth graders selected Kenya and the helping pillar of education, they set about to raise $10,000, the cost to build a school in partnership with Free The Children. Capitalizing on the organization’s free educational resources and action campaigns, they organized the first-ever Free The Children fundraiser at their school: a coin drive held in conjunction with Lent. Their efforts generated more than $850 in contributions from fellow students.  A Club Penguin Matching Fund program added another $150.

Next up, the fourth graders hosted a silent auction and raffle, personally soliciting local merchants for donations such as cupcakes, private tennis lessons and horseback riding lessons. This time students and parents were invited to participate in a fundraising hike to raise money through pledges. The auction, raffle and hike added another $6,000 to the $1,000 from the coin drive, totaling $7,000 toward their fundraising initiatives to support education in Kenya — and these fourth graders have no plans to stop.

About Free the Children:

Initially founded in Canada by then 12-year old Craig Kielburger in 1995 along with 11 school friends to fight child exploitation, Free The Children today works in eight of the world’s most impoverished countries to break down barriers to access to education.  While many charities focus on children as recipients of aid, Free The Children believes that youth are often the best problem solvers. Its Adopt a Village Program has brought more than 650 schools and schoolrooms to youth, and it has provided clean water, health care and sanitation to one million people around the world, freeing children and their families from poverty. As the organization’s Senior Education Coordinator Hallie Pond explains, Free The Children is the largest network of children helping children through education.

Visit Free The Children’s website http://www.freethechildren.com/to watch videos, to peruse annual reports, and to check out a plethora of articles about its multifaceted programs, including specifics on how to help.  Or better yet, if you have first hand experience with the organization, write a review at GreatNonprofits. You can find their profile here (http://greatnonprofits.org/org/kids-can-free-the-children) and write a review here (http://greatnonprofits.org/reviews/write/kids-can-free-the-children).

Interested parents, students and teachers are invited to contact Hallie Pond, Senior Educational Programming Coordinator for Free The Children, at 650-353-4683 or hallie@freethechildren.com.

Contributing writer:  Big thanks to our volunteer writer, Carol Elster Mahamedi for her time and contribution to this article.