Wreaths Across America Strives to Honor Veterans Every Day 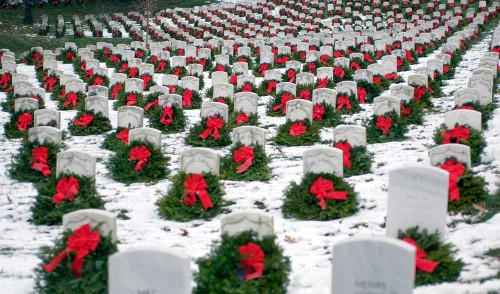 Image Provided by: Wreaths Across America

An important yet often-overlooked holiday is rapidly approaching.  Veterans Day, a federal holiday honoring those who served in the United States Armed Forces, falls on November 11. But it tends to be neglected in the frenzy between Halloween and Thanksgiving.

Fortunately, from its small-town Maine headquarters, 2013 Top-Rated Nonprofit Wreaths Across America (WAA) is working to keep the spirits and memories of our soldiers alive all year, not just on select holidays. Executive Director Karen Worcester explains, “We try to remind people to honor our veterans every day.” While WAA works year-round to fulfill its mission, Veterans Day heralds the kickoff to its busiest season, when volunteers lay holiday wreaths at the graves of thousands of veterans all over the United States.

It all began in December 1992, when Karen Worcester and her husband, Maine businessman Morrell Worcester, donated 5,000 wreaths for Arlington National Cemetery’s annual wreath-laying ceremony, a tradition they’ve continued ever since. “We never set out to start an organization. It was strictly a family event” says Karen. But their quiet tradition was thrust into the spotlight in 2005 when a Pentagon photographer’s now-iconic picture of wreaths in snow began circulating the Internet.

To the couple’s surprise, media inquiries along with emails, letters and phone calls of support began inundating their business in tiny Harrington, Maine (population 882), Worcester Wreath Company. Two years later, the Worcesters expanded their family’s Arlington wreath project to a national movement, forming Wreaths Across America as a 501(c)3 nonprofit. WAA’s mission—remember, honor, teach—is carried out with wreath-laying ceremonies at Arlington National Cemetery, as well as at veterans’ graves in every state. With a year-round staff of five at its Maine headquarters, WAA now has 900 locations, each completely run by volunteers.  “We’re very young, but we’ve grown at an incredible rate,” says Worcester.

As of 2013, WAA volunteers have placed more than 200,000 wreaths on the final resting places of American soldiers, sailors, airmen, Marines, Coast Guardsmen and their family members in locations around the world, including historic sites such as Normandy, Pearl Harbor, Bunker Hill and Valley Forge. Many no longer have family members to visit their graves.

WAA also operates a free museum in Columbia Falls, Maine, dedicated to the memory of the nation’s military. It showcases the hundreds of items that have been donated to the organization over the past 20 years. These include personal photos, awards, uniforms, helmets and other memorabilia from the military.

See these incredibly moving stories about Wreaths Across America:

About Wreaths Across America

Ever since 2008, Congress has decreed the second Saturday of December at 12 p.m. ET as Wreaths Across America Day. This year it will be held on Saturday, Dec. 14. Many of WAA’s locations will also conduct local Veterans Day events. To volunteer your time to place a wreath on a veteran’s grave at any of WAA’s participating locations, click here.  Or, consider sponsoring a wreath to be placed on a veteran’s grave.  To learn more about setting up a new WAA fundraising group, click here.

About Other Nonprofits Serving Veterans

Contributing writer:  Big thanks to our volunteer writer, Carol Elster Mahamedi for her time and contribution to this article.