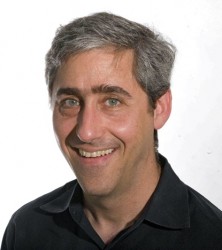 Picture your life helping thousands of children discover their own confidence, talent and dreams – by making music. Add in jamming with musical legends like Carlos Santana and John Lee Hooker. March is National Music in our Schools Month (#MIOSM), which makes it the perfect time to take an Inspiration Break with the music maker who has created such a life.

Dave Wish has brought music education and inspiration to more than 500,000 low-income children in 14 states since 2002. He is the founder and CEO of Little Kids Rock, which is firmly rooted in the belief that all people are inherently and profoundly musical. Take a moment to get to know this passionate and inspiring guy!

What is your favorite quote?

“We are the music makers and we are the dreamers of dreams.”

It’s part of an old poem, but most people first heard it in the movie Willy Wonka (the Gene Wilder version) when he was in his Inventing room, you know where Violet turned into a blueberry. I love that quote. It really speaks to me and to what I do and love. 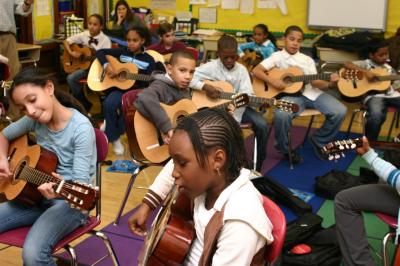 How did Little Kids Rock start?

In 2002, I was teaching at a school that was actually the murder capitol of US that year. There were kids with some really tough situations, yet they were so amazing. I just fell in love with their spirit. They had no music program so I wanted to start one. I really didn’t like music classes as a kid so I knew it had to be fun.

With a few simple chords, and some music they knew and loved, I managed to teach 35 1st graders how to play guitar. Soon they were writing their own music. By the end of the year, they were releasing their own tapes and CDs. These were 6 year olds.

I brought in guests like Carlos Santana, John Lee Hooker, and others. It just grew and grew and it was so sad when we had to start turning kids away. It was a real Eureka moment when figured how we could build out. Since 2002, 1700 schools have been able to give the transformational gift of music education to over 500,000 kids. We are still growing and still serve about 235,000 kids this year in Kindergarten through High school.

How do you take people who have never played and turn them into music makers?

I believe all humans are inherently and profoundly musical. If you start out with that belief, making music with other people is very easy. Recently I turned 200 strangers (adults) into a band at a conference. They were astounded. To me, the music was simply created by leveraging something that is very natural to all humans. I’m only drawing out of people what is already there. 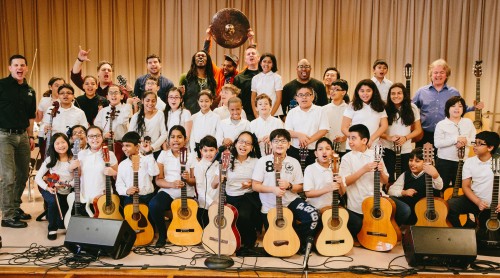 Who are the dream musicians that you’ve had jam with kids in your program?

So many great musicians have played with kids via Little Kids Rock. Some favorites include Slash, Joan Jett, Steven Van Zant, Brian Wilson, Billy Joe Armstrong, and Victor Wooten, bass player for Bela Fleck and Flecktones who simply and clearly describes in a video called Music as a Second Language how music is a language we can all learn. The musicians are equally inspired by kids. They see reflection of their younger selves and love being able to pass the torch. 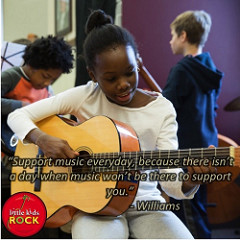 What else does making music bring to these children?

Music can bring out the most desirable qualities we hope for in all children – in all people. Listening, being a team player, leadership, empathy and creativity.

What can parents do to foster a love of music in their child?

Listen to a lot of music in the house. Buy them an instrument. Take them to concerts. Expose them to all kinds of music, not necessarily the kind you like. Let a child take it where it will take them. If you make music, go for it. Play around and jam in front of your kids.

Ironically, forcing kids into music lessons, especially on an instrument they do not like, can backfire and cause resentment. Whether it’s drums, piano, or piccolo – let the motivation come from the child. Follow their own bliss in music – not yours or their teachers.

Fueled by his belief that we are all innately musical, Dave Wish founded and serves as Chief Executive Officer of Little Kids Rock, a nonprofit that funds and runs one of the largest, free instrumental music programs in US public schools.  Little Kids Rock has provided music education for more than 500,000 low-income children in 14 states.  And it is a Top-Rated Nonprofit.  Dave’s work has been highlighted in The New York Times and CNN.   Dave is also active in the broader field of music education. He sits on the Board of Directors of the Quincy Jones Musiq Consortium and the Advisory Board of Spread Music Now.