Inspiration Break: Robert Egger on Keeping the “Pizzaz” in Giving Back

For our Thanksgiving version of Inspiration Break, we sit down with Robert Egger, nonprofit leader, activist and speaker. Egger is the founder of both D.C. Central Kitchen and L.A. Kitchen, two nationally recognized community kitchens that recycle food from local areas while teaching work skills to unemployed adults. 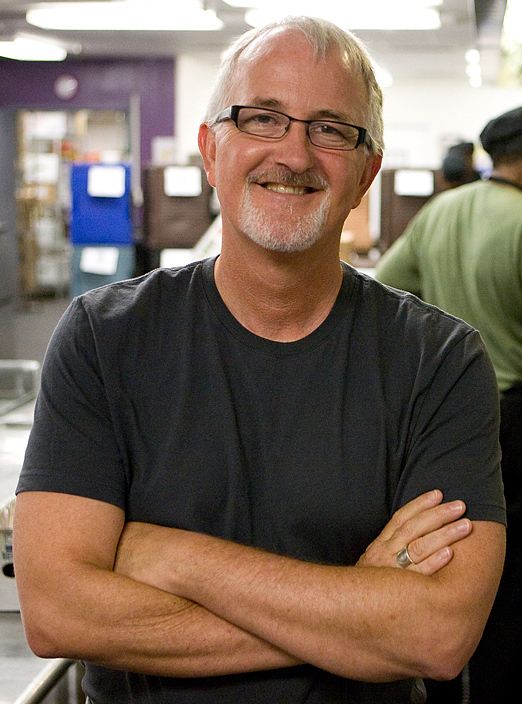 What experiences did you bring from club promoting into running a soup kitchen?

For lack of a better word, Pizzaz! I wanted the kitchen to be joyful, versus dour. Optimistic, versus negative. Constantly adapting and morphing to meet new needs, versus doing the same thing over and over. Like punk rock, I wanted it to be loud, unrepentant and demanding. I wanted it to be an agent of change, with an open invitation to join the party. As Stevie Ray sang, “If the house is rockin, don’t bother knockin.”

What advice do you have for creating a sustainable nonprofit?

Be focused on the larger movement, not just your program. I’ve always been an open source, which is why there are over 100 cities with programs based on my work. One of the main reasons for that is that I only use what exists in every city…wasted food, wasted people, underutilized kitchens, volunteers, city contracts and the public’s enthusiasm for innovation. So my advice…use what’s already there with audacity, and then share your work openly.

You’ve been working with charities for over 25 years. What strategies do you use for avoiding “nonprofit burnout?”

I’m not a nonprofit. I’m a C3 organization…which, to me, stands for “caring, committed and couldn’t care less for process or proprietary”. Plus, I’ve worked VERY hard to avoid founder’s syndrome, or flawed notions of leadership. I like to share in the decision making process, and I work to stay wildly open to change. Mostly though, I’m committed to being the man I wanted to become when I was 16.

How did you get started in charity work?

I was a reluctant volunteer who looked at the charitable experience I encountered (feeding “the poor” on the streets on Washington, DC) with fresh eyes. I saw things (opportunities, obligations, connections) that others didn’t because of they had settled into a routine, or because the experience served their needs, versus the needs of the people on the receiving end. NONE of this was bad or wrong…anytime you feed a person, and help to lessen a load, you’re doing good…I just wanted to do good, better. So I came back with a business model based on FedEx, and suggested that a central processing kitchen would allow them to collect thousands of pounds of food that was being wasted or thrown away, and they could feed more people, better food, for less money…but more importantly, I suggested that if they offered men and women in shelters, or coming home from prison, the chance to be part of the solution, versus being in need of “services”…and if they opened a cooking school to train folks for jobs while they processed random donations of food into healthy meals, you could shorten the line by the very way you served it. To my surprise, my idea was rejected over and over again…so I decided to do it myself.

A lot of people would be satisfied to address just one social issue, but you’ve managed to address at least three. How did that happen?

It’s the way I like to roll. Coming from music and nightclubs, particularly in the late 70-s and early 80’s, there was a joyous mash-up of sounds going on. Think Al Green’s “Take Me To the River” done by the Talking Heads, or “Satisfaction” done by DEVO. I hate boundaries, false barriers and routine, so I like the constantly challenge myself and our team to think bigger, bolder…badder.

Why did you decide to start a kitchen in L.A.?

L.A. is the city where the future comes to happen. But for my purposes, L.A. offers proximity to the greatest source of fresh food in the world…and because we collect or buy fruits and veggies that are often discarded for cosmetic reasons, we’ll have access to millions of pounds, year round. But it’s also the epicenter of aging in America. It’s crazy when you think about it, L.A. is both the “temple to youth” culturally, but it also has the largest concentration of older Americans…and that number will double (from 1.25M to 2.5M) in the next ten years. I built L.A. Kitchen to be part of redefining senior nutrition, and to explore ways we can feed more people, healthier meals, for less money. But more to my heart, I want to challenge every boring, rotten stereotype about aging I can. As much as I lament, and have fought against food waste, I am infinitely more focused on how to avoid wasting people. My motto now: Wrinkled Food, Wrinkled People, NO WASTE.

Walk us through a typical day at work for you.

I wake up roaring, and go to bed exhausted…and I never stop.

You’ve done a lot of interviews about your work. What’s one question you never get asked, but secretly wish you did?