Busting the Myth of Overhead: What Really Matters in Charitable Giving 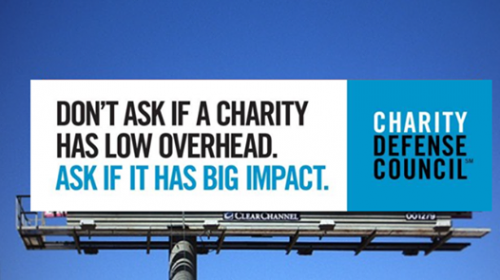 It’s the home stretch for donors to make tax deductible charitable gifts in 2014.  To help donors choose wisely during this season of giving, some websites focus on overhead costs to judge a nonprofits’ effectiveness. But contrary to popular belief, overhead costs don’t tell the whole story. “Don’t ask if a charity has low overhead.  Ask if it has big impact,” according to entrepreneur and author Dan Pallota.

The majority of 1.2 million nonprofits in the United States have an operating budget of 250 thousand dollars or less.  For most nonprofits, the workload falls on two full time employees and a couple dozen volunteers.  Overhead is the cost of basic operating expenses to “keep the doors open” including rent, computers, and health insurance for employees.  It is illogical to expect that nonprofit organiztions should somehow magically not have these same overhead expenses as every for-profit organzation.

“You can’t run a high-performing organization from your car”, says Ben Paul, President and CEO of After-School All-Stars, a nonprofit organization that provides after-school and summer camp programs for at-risk youth.

So instead of dwelling on a charity’s overhead costs, donors should ask themselves if the nonprofit is making a difference.  The best way to find out a nonprofit’s impact is to ask people who have experienced it first-hand.  Talk to volunteers and the clients they serve.

Online reviews of charities also offer more valuable insight.  GreatNonprofits.org just published the 2014 list of Top-Rated Nonprofits based on crowdsourced reviews.  The Top-Rated Nonprofit Awards helps donors and volunteers find worthy charities to support during this season of giving. A survey by GreatNonprofits indicates that 90% of donors find reviews helpful and 80% say that their donation gets influenced by reviews.

To decide where to give this holiday season, stop focusing solely on the numbers and start talking to the people who have experienced the nonprofits’ impact firsthand.